In case I haven’t made it apparent by now, I’m kinda an  Avatar: The Last Airbender and The Legend of Korra fan. I mean, you guys must’ve noticed what with all my essays and post-caps and all. Either way, what I’ve probably never really mentioned on here is that I’m also a bit of a beader and jewelry maker with a store called Pretty Poet Ink. It all started when I worked in a craft store in Queens, and it quickly spiraled out of control. I started buying all kinds of beads without any kind of thought, but sometimes they would speak to me. And one day, as I watched several episodes of Avatar Book 2, particularly “The Tales of Ba Sing Se”, inspiration hit.

First, it started with these earrings, which I called “Red Paper Lanterns”: 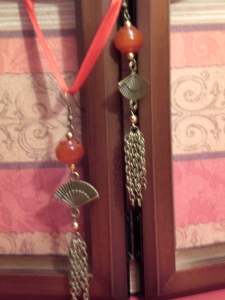 When I looked at the red agate barrel shaped beads, I couldn’t help but think of the lanterns Zuko lit for Jin that night. I added fans, as I had them, and chain for a little dangle.

But then I grew more inspired.

So, thinking of a friend of mine — who did this pretty amazing Fire Nation-inspired makeup — I thought back to my desire for her to do a Kyoshi-esque makeup. She didn’t have the time to do one, so I decided, why not make a bracelet!

My first attempt at the “Kyoshi” bracelet was pretty… well, not that great. I wasn’t pleased with how clunky it was with all the irregular cube-shaped jade just sticking out there like that. So, after staring at it for a good minute, I felt that it needed a little tweek. Removing the center piece, I found a beautiful Jasper bead I hadn’t noticed before, and wrapped it with wire, making it the focal bead.

I also remembered that black and white were a part of the Kyoshi uniform (their make-up and gear) and I decided to incorporate that with clear Swarovski crystals and sweet black agate beads. I’ve wrapped the end beads, jasper as well,  like the center bead and removed a fan, making it the focal clasp.

But this was not my prized Avatar-inspired piece.

Somewhere in between making earrings and bracelets, I thought of Uncle Iroh. The Dragon of the West. The re-director of lightening. The tea maker. The jolly, round-bellied man who was chock full of wisdom and love. The father who lost his son. Something about Iroh called to me. And as I looked over my beads, I started to create the necklace that I would be most proud of creating: “Dragon of the West.” 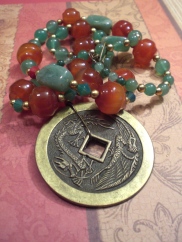 Made up of red agate, green adventurine, gold-plated brass beads and Swarovski crystals, this necklace’s shining glory is its double-sided brass donut pendant. One side features a dragon and bird chasing each other, while the other has four Chinese characters. 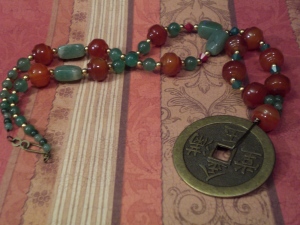 I couldn’t tell you how much time I spent making this baby, because I enjoyed it so much. I held on to this necklace for quite a while, with my sister enjoying a wear in the trio once or twice. Finally, a cousin of mine wanted to buy a gift for a woman he was seeing and he liked the set. I didn’t want to part with it — I’d love this set too much, but it needed a home, and so I gave it up… relatively cheap too! I barely made a profit on it (if I made one at all), but I love it when my pieces find homes. And I’d like to think that I brought a little bit of Avatar into the wearer’s life!

Check out some of my other pieces over at Pretty Poet Ink!

One comment on “Avatar: The Last Airbender-Inspired Jewelry By Pretty Poet Ink [PHOTOS]”

There was an error retrieving images from Instagram. An attempt will be remade in a few minutes.